From the Arctic at Christmas 1970 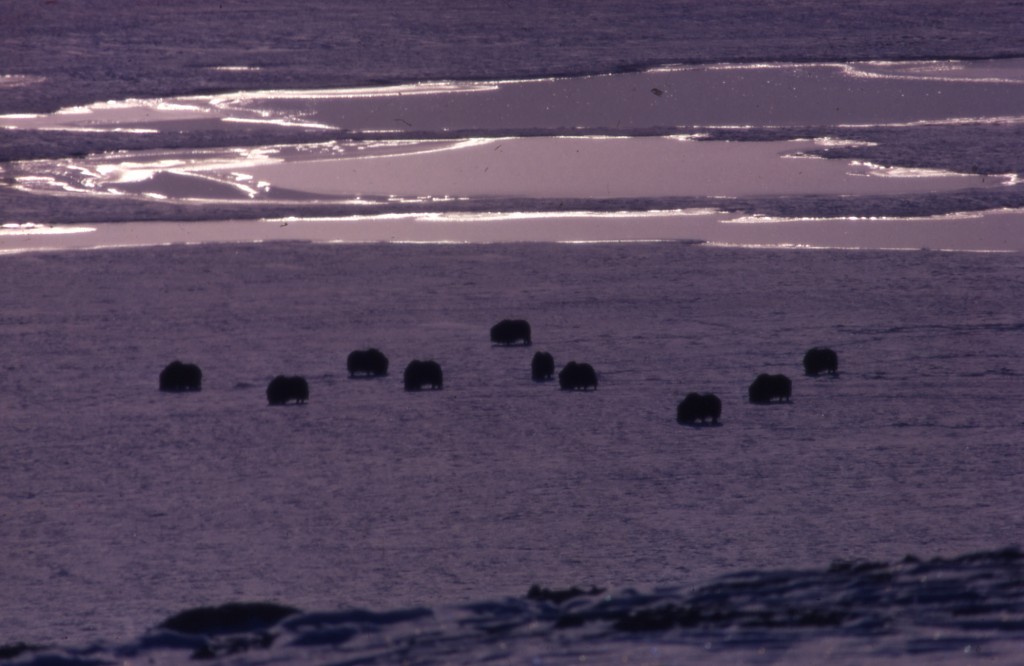 Today is exactly 44 years from the day I wrote the attached Christmas poem about our 1970 Arctic Christmas air drop. My friend Don Cockerton and I were spending the winter on Bathurst Island studying the behaviour of muskoxen as part of my PhD work. It was during this long winter that I gained an appreciation for what the men of the CAE experienced in their winter stays almost a hundred years earlier.

We had last seen an airplane, and people, in early November. Sun Oil Company, who were drilling a test well on southern Bathurst Island, offered to pick up our Christmas mail in Resolute Bay, and fly over and drop the mail at our camp. It was too dark, dangerous, and expensive to land. We had set out flare pots and a couple of bon fires so that they could see us easily. The last time they had tried this it was snowing and they could not find our camp! Not a problem on this night as it was clear and cold. That pre-Christmas mail drop was a wonderful break in our “isolation.”

From the Arctic at Christmas

‘Twas four days before Christmas, when across all the snow,

Not a creature was stirring as far as we know.

The flare pots were burning and watched over with care,

In hopes that the aircraft soon would be there.

After waiting for hours we took to our beds,

And visions of muskoxen danced in our heads.

I in my corner, already asleep;

And Don lying restlessly, not quite so deep.

Then out on the tundra arose a new sound.

We sprang from our beds with a single great bound,

And on with our clothes and a dash to the door;

For this was the sound we’d been waiting for.

The moon on the drifts of the hardening snow

Cast a soft glowing light on the valley below.

And then to our wide-searching eyes there was shown,

The lights of the aircraft which from Resolute had flown.

It came to us quickly, lights flashing bright;

So clear from a distance, the red, green and white.

The sound of the engines, like the wind in the trees

And we hoped he’d fly faster so we wouldn’t freeze.

He flew over slowly, low enough for a thrill

Then on the second low pass there came down,

A great canvas bag, which we quickly found.

A dash to the radio to thank him with glee

But to my surprise there should have been three!

Back to the ridge top to search o’er the snow

Looking with lanterns, wondering where did they go?

After searching and searching we gave up in the cold,

And again to the radio when we were told,

“Two bags were too large so we dropped only one!”

We must wait for the next flight and more of this fun.

The Twin Otter departed again through the night,

As the sound of his engines faded away,

We put out the fires and loaded our sleigh.

Back to the Parcoll, the bag safely secured,

The bag was upended and dumped on the floor

And the two of us wondered, “How could there be more?”

Good letters from friends all over the land,

And parcels and goodies and “Boy, ain’t this grand!”

The parcels of course were all hidden away,

To be brought out again on the Christmas Day.

We sat down and read till exhausted it seems,

And all night long kept reading in dreams!

To hear from our families and colleagues and friends,

Was such a great pleasure that time never ends.

With thanks for the letters and messages of cheer

We wish that you all could be with us here.

From the Arctic at Christmas, so peaceful and white,

Happy Christmas to all and to all a good night!