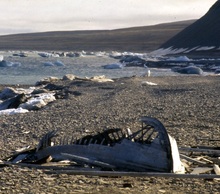 The Canadian Arctic Expedition of 1913-1918 was the first Canadian Government expedition to the western arctic and at the time, the largest multi-disciplinary scientific arctic expedition ever mounted. It was an important event in Canada's history and had a profound impact on the world of science, and on the people of the north, an impact that continues to this day.

In 2017 we are continuing the commemoration with a new expedition to the Arctic mainland coast and Banks Island in the 100th year after the last of the CAE explorations in Canada’s Arctic.

The purpose of this website is to provide some general background to the Canadian Arctic Expedition, to promote the new CAE ventures that we are involved in, and to provide links to various sources of information on the Expedition and ongoing research activities.

David Gray’s long-standing interest in the Canadian Arctic Expedition has led to extensive research on the Expedition, several magazine articles, a Virtual Museum of Canada exhibit, and a major exhibition at the Canadian Museum of Civilization in 2011-2012.

The online virtual museum exhibition Northern People, Northern Knowledge: the Story of the Canadian Arctic Expedition of 1913-1918 was created for the Canadian Museum of Civilization and the Virtual Museum of Canada in 2003.
www.civilization.ca/hist/cae

In 2010 David researched and directed the 1-hour documentary film, Arctic Shadows: the Arctic Journeys of Dr. R. M. Anderson. This film includes Anderson’s experiences as Head of the Southern Party of the Canadian Arctic Expedition. Funded by the International Polar Year, it was screened at the IPY Film Festival in Ottawa in 2009 and Inuvik in 2011 and at the Arctic Film Festival in Minnesota, USA in 2012.
www.arcticshadows.ca

David was the curator of a major new exhibition, Expedition Arctic: 1913 – 1918, which opened in 2011 at the Canadian Museum of Civilization. The exhibition received an Honourable Mention in the 2011 Governor General’s History Award for Excellence in Museums – History Alive! Award. After a year at the CMC, the exhibition is now being shown across Canada. Visit the CAE exhibition blog at:
www.civilization.ca/arctic/blog

In 2013 we launched the first expedition to locate, map, film, and officially document sites where the CAE established camps and caches along the west coast of Banks Island, from Sachs Harbour in the South to Cape Prince Alfred in the North. To see the results of that amazing expedition, visit the 2013 Expedition page.

This summer we are again travelling to the western Arctic to continue our explorations of the CAE sites along the Arctic mainland coast and north to the northwestern tip of Banks Island. Learn more on our 2017 Expedition page.

David, Mitzi, and Mack are all safely home.

The Bernard Explorer with Captain Bob and Paul is in Nome, Alaska. The blog will continue with new photos and information.