Last week I spent some time in the records of the Canadian Arctic Expedition files at Library and Archives Canada, looking for purchase orders and bills that might cast some light on some of the artifacts we found at the Mary Sachs site on Banks Island. I was hoping particularly to find mention of the “SUCCESS” stove and the spent ammunition shells we found. I am also trying to find records relating to the Woods Arctic Parkas supplied to the CAE. However, just as in the Arctic field research, you often don’t find quite what you are looking for, but do find other things of interest. The CAE purchase and ordering files that are at LAC almost exclusively deal with bills that were not paid on time, or for which there was some problem of delivery etc.  Among the colourful correspondence files are letters from Jaeger’s Sanitary Woollen System in Montreal (underwear and pj’s); The Gaumont Co. Ltd. Office in Piccadilly Circus, London (cinematographic  supplies); The Liebes & Company Manufacturing Furriers in San Francisco (freighting services); Hibbard-Stewart Co., Furs, 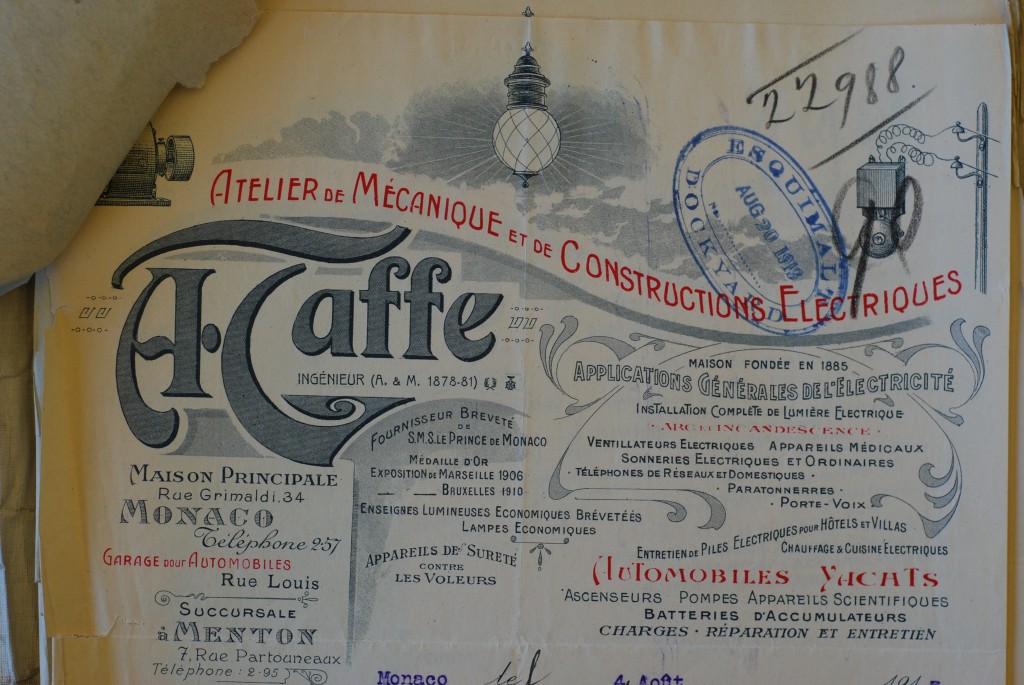 A. Taffe, Monaco, manufacturers of Appareils Scientific and almost anything else!

Whalebone & Ivory, Seattle, Washington (new schooner); Taffe’s Appareils Scientific, Monaco (special oceanographic equipment); and The Kootenay Jam Company, Mission City, British Columbia (1000 lbs of chocolate!). This week I will re-search the CAE files at the Canadian Museum of Nature where there are many files relating to items ordered for the 1913 Expedition in documents kept by Dr. Anderson, zoologist and Head of the Southern Party of the CAE.

We are also busy viewing the last few hours of the HD video tapes which have generally been better than I expected due to the conditions. Our evening presentation on the 2013 Expedition will be on Saturday, September 28th, at 7 pm, at Trinity Bible Church in Osgoode (on the south side of Ottawa). I’ll post the invitation soon.