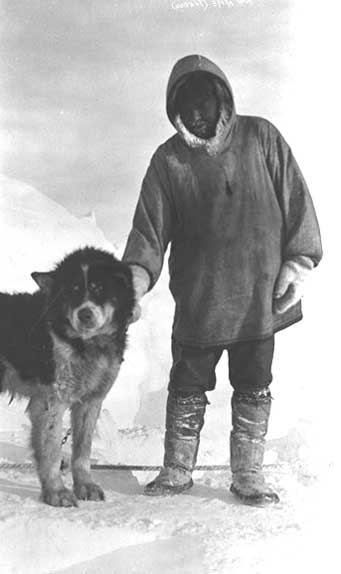 In mid November of 1914, George Wilkins and Natkusiak spent several days at a hunting camp north of Sachs Harbour. They had shot over 60 caribou and had begun transporting the meat back to the base camp at Mary Sachs. This was a week of fog which hampered their hunting and on the 3rd of November they were confined to camp by the weather.

November 2, 1914: “As I was cooking breakfast, Billy [Natkusiak or Billy Banksland] went out to see what the dogs were barking at. Two deer were near the camp, and he shot them. I kept them both for specimens [now in the Canadian Museum of Nature collections]. The fog prevented us from hunting far afield. Billy caught three foxes today, making a total of thirty-seven since we started out.

During that week, Stefansson, Charlie Thomsen and Storker Storkersen had established another hunting camp on the west coast. Leaving Jennie Thomsen and Elvina Storkersen, with their two children, at the coastal camp, Stefansson and the others sledded east to Wilkins’ camp to plan their winter travels north. Unfortunately none of the men mapped the locations of these hunting camps and so it is difficult to discover where they actually were one hundred years ago.