“The ice had moved a few miles further on during the night, and the way was clear as far as the river before mentioned. We were now approaching the lower land, and I thought that on this point would be a good place to leave a cache of supplies.

We therefore placed the following articles in an iron drum and set them on the top of the bluff: flour, 200 lb, sugar, 50 lb, tea, 51 lb, a .30-30 carbine and 200 rounds of ammunition, a primus stove, cooking pots and matches. Five gallons of kerosene were also cached and on the top we placed a wooden cross….

We proceeded to the mouth of the river [Sachs River] and anchored. Since leaving the first river we passed, this is the only place where it would be practical to haul the schooner [Mary Sachs] on the beach, and hauled she must be this year if we want to use her again next summer.

I followed the cutbank for a mile or so towards Cape Kellet, which place could now be clearly seen. The ice is moving slowly to the west, and we should be able to advance a little further tomorrow.

There is a little wood lying about on the beach, and while I was away the others had gathered a dory load of it. They had seen three old camp sites and I went to have a look at them. They appear to be winter camps of hunting parties, for chopped wood is scattered about and a quantity of bones. The camps appear to be many years old, and the wood seems to have been cut with a sharper edged tool than a knife of copper. Several muskox skulls were seen and numerous deer antlers.” Diary of George Hubert Wilkins 1914 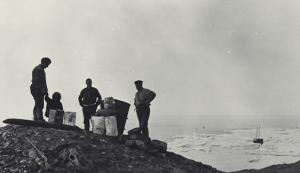